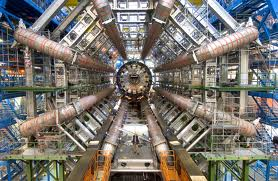 THE world’s most powerful atom smasher is to be re-created in Belfast.

It is part of a major new public exhibition to be held in the city this week.

Visitors will be able to walk through a full-size replica of a section of the Large Hadron Collider (LHC) when it goes on display at Queen’s University.

Dr Steve Myers, director for accelerators and technology at Cern (Council for European Nuclear Research), the organisation that built and operates the LHC in Switzerland, said it was a unique chance to see the real application of physics.

“As a Queen’s graduate I’m delighted to return to the university for such a special event. For many people it will be a once in a lifetime opportunity to see the real life application of physics and science in such a setting.

“Queen’s is one of the UK’s leading research universities and it gave me the skillset, foundation and opportunity to go on and become a key part of the world’s largest science experiment,” he said.

This is the first time a major exhibition on the work on the LHC has come to Northern Ireland.

Physicists including Professor Peter Higgs – the man behind the discovery of the so-called God particle or Higgs Boson – will also be on hand to help answer questions on some of the most complex mysteries of the universe.

“Queen’s graduates have gone on to work at Cern as well as other major scientific organisations like Nasa and the European Space Agency.

“This is an opportunity for potential students and the public alike to see how Queen’s and physics is having a real impact and where a career in the subject could take them,” said Professor Alan Fitzsimmons, from Queen’s school of mathematics and physics.

The LHC is a 27km (16.8 miles) circular tunnel that straddles the Swiss and French borders on the outskirts of Geneva.

It aims to recreate conditions similar to just after the Big Bang by smashing two beams of particles head-on at super-fast speeds in an attempt to answer fundamental questions of science and the universe and was first switched on in September 2008.

The LHC is currently undergoing a £70 million upgrade which is scheduled to be finished by 2015.

The replica will be on display at Queen’s Whitla Hall from Saturday.