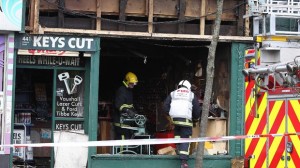 AN investigation is underway to discover the cause of a blaze which badly damaged two shops on Belfast’s Lisburn Road.

The fire broke out in the shoe repair business in south Belfast shortly before 11am on Sunday.

It quickly spread to the premises next door, including an ice cream parlour and photography studio, before fire fighters extinguished the blaze.

Alan Hamill, from the Fire and Rescue Service, said they are still trying to establish what sparked the fire.

He said: “There was a lot of smoke on the Lisburn Road and it was difficult to determine which property was actually on fire.

“There was a little bit of smoke damage in the adjoining properties, which we are now searching to make sure there’s no fire damage.

“From first indications the damage would just be confined to the ground floor of the shop and on the roof there would not appear to be any structural damage.”

The blaze is not through to be suspicious, and the Lisburn Road later reopened.