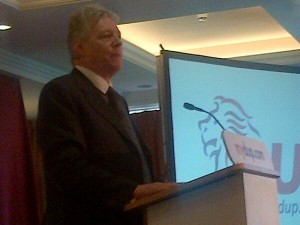 DUP leader Peter Robinson has said the people of Northern Ireland need his party to be in government.

The First Minister was speaking at the DUP’s spring conference held at the Killyhevlin Hotel in Fermanagh.

He was replying to a claim by Martin McGuinness that some unionists do not want to be in government with Sinn Fein.

The pair recently held clear the air talks at Stormont to iron out differences between them on forge ahead with its Programme for Government.

Mr Robinson also said his party has not ruled out running two candidates in the next European elections.

But he said no decision had yet been taken.

He said that the past few months had been “demanding and dangerous times for our political process”.

He added: “I don’t need to tell you that Stormont isn’t all we would wish it to be, but even in its existing form, it underpins the peace, stability and prosperity that has been won.

“Six years after we restored devolution and entered the executive, some have questioned our commitment to this process.

Mr Robinson said the controversy over flying the union flag at Belfast City Hall had been a “disaster” for Northern Ireland.

In December, Belfast City Council voted by 29-21 to fly the flag only on designated days.

Mr Robinson said: “By any standards it was an aggressive and unnecessary step.

“Because if republicans are intent on a cultural war you can be certain of one thing – it will be a battle that will have no winners.

“The settled, if delicate equilibrium, in Belfast was overturned at a stroke with all of the consequences that we have witnessed in the last few months.”

Returning to his theme of Catholics voting for the union, Mr Robinson said in 50 years time, it would be their votes that would ensure Northern Ireland’s place in the United Kingdom.


One Response to ROBINSON: NORTHERN IRELAND NEEDS DUP IN GOVERNMENT