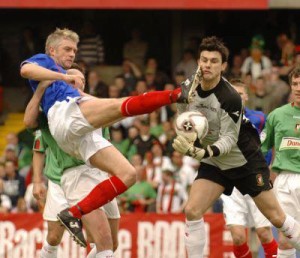 AFTER 16 years at the heart of the Linfield defence, William ‘Winky’ Murphy will on Saturday bring the curtain down on his career at the Blues.

The club announced on Friday that manager David Jeffrey had decided not to offer ‘Winky’ a new contract.

The 39-year-old will make his last – and 639th – appearance for the Blues in Saturday’s match against Crusaders.

Murphy joined Linfield from Ards in September 1997 and went on to win a string of honours with the club.

Earlier this week it was revealed that promising central defender Mark Haughey is to join Linfield from Glenavon.

“I am a realist. I cannot go on for ever and all good things must come to an end,” Murphy told the club’s website.

“Linfield must continually strive to improve and bring in new and fresher younger players.

“I accept that my chapter in the club’s success story is at end.”

Blues manager Jeffrey said: “William will go down as one of the great centre backs in the history of this club.

“When you think of the number of appearances he has made for this club, it is quite incredible.

“His influence in the changing room is quite superb. All the players look up to him and respect him.

“His commitment to this club, whether it was playing for the first team or the Swifts, has been absolutely fantastic. His relationship with the supporters has been second to none.”

Jeffrey said the announcement was made on the eve of the final match of the season to give fans the chance to say farewell to Murphy.

Player Billy Joe Burns tweeted on Friday evening: “Gutted to here news on big winky was a pleasure to play along side him a few times… big loss on and off the pitch.”