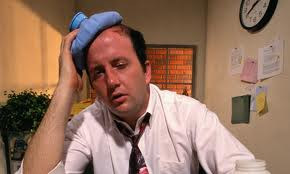 THE cost of sick leave across Northern Ireland’s health, education and civil services was almost £150 million in 2010.

And according to an audit office investigation, significant extra savings could be made through greater efficiencies, the spending watchdog added.

Prison staff and members of junior grades were most likely to take time off.

Non-attendance levels have fallen and was largely down to long-term problems – particularly concerning mental health, the audit report said.

Comptroller and Auditor General Kieran Donnelly said: “If absence levels could be reduced to match those in Great Britain savings of £37 million are possible.”

Levels have been falling in recent years, in the civil service to 10 days per staff member per year compared to more than 13 eight years ago.

In the health and social care sector the regional average for time off in trusts was 5.5% of working days in 2010-11.

The health department has suggested the risk of spread of infection to patients, the physical nature of the work undertaken by staff and the demands of shift working helped explain absence.

Teachers’ absence has fallen from more than nine days in 2006-07 to over seven days last year while significant increases in two of the six education authorities were attributed to non-teaching staff.

Mr Donnelly added: “Sickness absence in the Northern Ireland public sector results in a significant cost. I welcome the improvements that are being made, however targets have not always been met and there is scope for further improvements.”

Long-term poor health accounts for most absence in all sectors – around 70% of days lost in the civil service, 66% in health and social care trusts and 60% of teachers.

The report said: “There has been insufficient progress within Northern Ireland’s civil service to meet targets for reducing the levels of long-term sickness absence.

“Long-term sickness is also identified as a significant problem within trusts and as a material factor for teaching and non-teaching staff within education authorities.”

He added a large number of the absences were linked to prison officers, who are not covered by NIPSA.

“I am surprised at all the criticism, this is a good news story because we are just short of the target that was set,” he added.

CBI Northern Ireland director Nigel Smyth said while year on year progress is being made in reducing sickness absence in the public sector, there remains significant work and significant savings still to be achieved.

“We continue to have much higher sickness absence levels compared to the public sector in Great Britain, and significantly higher than in the private sector,” he added.

“In the context of constrained public sector budgets, the loss of £149 million in 2010-11 on account of sickness absence is simply unacceptable and unsustainable.”