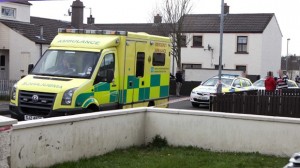 A 28-year-old man has faced a court over the fatal weekend stabbing in a seaside town.

Kevin O’Neill, 25, died after an attack in the Stroanshesk Park area of Ballycastle on Sunday.

Nigel McGothigan, of Broombeg in the Co Antrim town, has been charged with his murder.

He was remanded in custody to Maghaberry Prison at Coleraine Magistrates’ Court on Tuesday.

McGothigan is due to appear again via videolink next month.