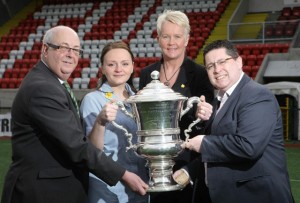 THE Irish FA has announced that the naming rights of the 2013 Irish Cup Final have been given to our official charity partner Marie Curie Cancer Care.

The Marie Curie Irish Cup Final takes place at Windsor Park on Saturday 4 May with kick off at 2. 30pm.

The final is between Danske Bank Irish Premier League champions Cliftonville and Glentoran.

Chairman of the Challenge Cup Committee, Gerard Lawlor, said that it is only fitting for the charity to be given this one-off opportunity.

“It gives me great satisfaction to give the naming rights to Marie Curie for this season’s Final.

“The Cup Final is always a special day for players and fans from both clubs, and it creates a huge amount of media coverage around the game, including live television and radio broadcasts.

“This provides a tremendous platform for Marie Curie to raise awareness and spread the word of the great work they do, and I am glad that we can play a part in that,” said Lawlor.

“This is a fantastic opportunity for us to help create awareness of the support we can offer to those who need end of life care and their families and carers. Sadly, every five minutes someone dies without the care they need at the end of their lives.

“We need to be able to reach more people through the nursing services we provide in people’s homes and through our hospice services – that’s why the support of the Irish FA and the footballing community is so important”.