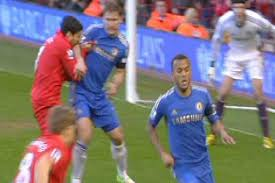 LIVERPOOL striker Luis Suarez has been fined by the club after biting Chelsea defender Branislav Ivanovic.

The incident occurred in the second half of Liverpool’s 2-2 draw against Chelsea at Anfield on Sunday.

The Professional Footballers’ Association said Suarez will be offered the professional services of an anger management course.

Suarez tweeted on Monday morning: “For my unacceptable behaviour yesterday the club has fined me today.

“I have asked the club to donate the money to the Hillsborough Family Support Group for the inconvenience I have created to the Liverpool fans and to Ivanovic.”

He added: “I’ve spoken to Ivanovic on the phone and I could apologise directly to him,” Suarez tweeted.

In an earlier statement, he said: “I apologise to my manager and everyone at Liverpool for letting them down.”

Blues defender Ivanovic, 29, complained to referee Kevin Friend that he had been bitten on his right arm by Suarez after their clash inside the Chelsea penalty area.

“Having reviewed the video footage and spoken to Luis, his behaviour is unacceptable and I have made him aware of this,” said Reds manager Brendan Rodgers.

Ian Ayre, the Premier League club’s managing director, added Suarez’s behaviour did not “befit” that of a Liverpool player.

“Luis is aware that he has let himself and everyone associated with the club down,” said Ayre, who cancelled a planned trip to Australia to personally handle the fallout.

“We will deal with the matter internally and await any action from the Football Association.”

Shortly after the match had finished, Rodgers pledged to review the incident and promised that no individual was “bigger than the club”.

“This is a club with incredible values and ethics,” he said. “There’s certainly no-one bigger than this club, a player or manager.

“As football managers, staff and players, we’re representing this club, off the field and in particular on the field.”