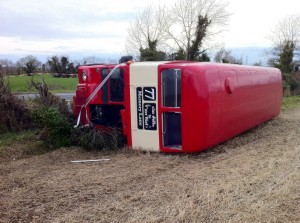 POLICE in Lisburn have appealed for information following the double decker bus crash at the weekend which left 14 wedding guests injured.

It happenda on the Old Ballynahinch Road, Lisburn on Saturday 20th April at approximately 4-10pm.

A Leyland double decker dus was travelling towards Ballynahinch when the vehicle overturned into a field whilst carrying approximately 62 passengers.

In total 14 passengrs were taken by ambulance to the Lagan Valley and Royal Victoria Hospitals but all have since been released with no life threatening injuries.

“Police also want to speak with the driver of Horse Box Lorry travelling along Old Ballynahinch Road in the direction of Lisburn,” said the PSNI.

“The vehicle is described as new, grey in colour with a white semi-circle on the rear doors.”

As police continue their investigations into the cause of the crash, Belfast Tours Limited said on Sunday their sympathies are with the victims.

“Our first thoughts are with those who were injured in the accident, which happened on Saturday afternoon and we wish them a full and speedy recovery,” said a spokesperson.

“We are unable to comment further on the matter at this point, as the accident is being investigated by the police.”