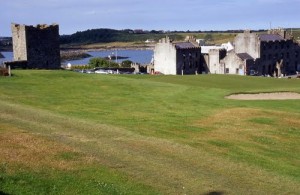 DETECTIVES are hunting two masked men armed with knives who robbed a Co Down golf club.

The men entered Ardglass Golf Club in the Castle Place area at around 10.55am on Monday and demanded money from staff. No one was injured in the incident.

The robbers left with a sum of money and made off in a silver BMW which was later recovered in the Ballygilbert area.

Police describe one of the men as being of heavy build and was wearing a black top, black waterproof jacket, dark bottoms and a red hat or scarf.

The second man is described as being tall, of slim build and was wearing a black top and dark clothing.

Anyone with any information about this incident is detectives in Downpatrick PSNI station on 0845 600 8000.