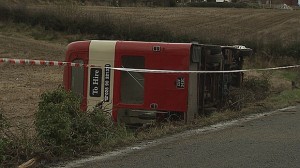 AN investigation is under way after 14 people were taken to hospital after a double-decker bus carrying wedding guests overturned near Lisburn.

None of those taken to hospital suffered serious injuries and the wedding reception went ahead as planned.

All those who were injured have now been discharged from hospital.

As police continue their investigations into the cause of the crash, Belfast Tours Ltd. said their sympathies are with the victims.

“Our first thoughts are with those who were injured in the accident, which happened on Saturday afternoon and we wish them a full and speedy recovery,” said a spokesperson.

“We are unable to comment further on the matter at this point, as the accident is being investigated by the police.”

John McPoland, from the Northern Ireland Ambulance Service, said 11 ambulance vehicles attended the scene of the crash along with a doctor and ambulance officer.

He added: “Fourteen people were hospitalised. 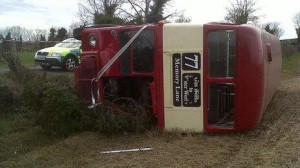 ” The 46 other people were checked out at the scene.”

The road has been closed at the Drennan Road and Ballynahinch Road junction.

Police have appealed for anyone who witnessed the incident to come forward.


One Response to 14 HURT AS WEDDING BUS CRASHES