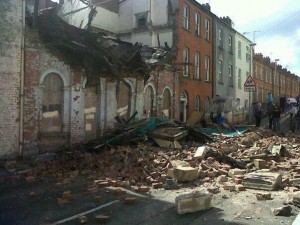 The scene of the building collapse in Derry

A building has collapsed in Derry/Londonderry’s Fountain area.

It is understood the Kennedy Street, building, believed to have once been used by the Ulster Unionist Party in the city, has collapsed on top of a car.

There are not thought to be any injuries to members of the public.