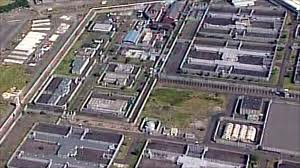 Maze prison has been closed for 13 years

ENVIRONMENT Minister Alex Attwood has on Thursdy morning given planning approval to building a Peace Building and Conflict Resolution Centre at the Maze prison site.

The SDLP MLA has now given the green light for work to start on the  PeaceBuilding and Conflict Resolution Centre at the Maze.

The decision of the Maze/ Long Kesh redevelopment follows the recent approval for the relocation of the Balmoral show to the site.

The building was designed by world renowned architect Daniel Libeskind along with McAdam Design.

A further application for minor works to the listed and retained buildings on the Maze site has also been granted planning permission today.

Reacting to the decision, Lagan Valley DUP MP Jeffrey Donaldson said: “There will be no story telling in the retained buildings whatsoever.

Commenting on his decision, Minister Attwood said: “I have today granted permission for the proposed centre.

“There is learning to be taken from the conflict here. The centre can contribute to sharing this learning and perhaps to help inform the resolution of conflict in other places.

“I believe that good planning needs good design. That is certainly the case in the design of the Centre created by Daniel Libeskind, a world leader in architecture and a friend of Northern Ireland.”

Commenting on the speed of the planning decision Alex Attwood said: “I was able to grant planning permission for such a major scheme like this in less than six months.

“This is another example of the benefit of pro-active pre-application discussion and community consultation in dealing with major planning applications of regional significance, such as this.

“This will play a significant part in meeting a target of the EU funding programme and I am determined to continue making major planning decisions speedily and accurately and making a planning system more fit to achieve its purpose.”

The jail, which housed many paramilitary prisoners during the Troubles, was closed two years after the Good Friday Agreement.

The future of the former prison site outside Lisburn has sparked much debate since it was closed 13 years ago.

Many unionists have been opposed to a Peace Building and Conflict Resolution site saying it would become a “shirine to terrorists”.

Mr McGuinness has said the project will send out “a powerful, physical signal highlighting how society here has been transformed and regenerated in moving beyond conflict.”

Mr Robinson denied claims from some unionists that the regeneration would become a “terrorist shrine” and emphasised the job creation it would bring.

But other Unionist politicians have been sceptical of the chosen location and have held protests in opposition of preserving the ‘H-block’ and hospital wing, where the IRA hunger strikers were kept.

The project was approved for £18m worth of European funding last year, which will see a Peace Building and Conflict Resolution facility and a development agency to unlock the commercial potential of the site. 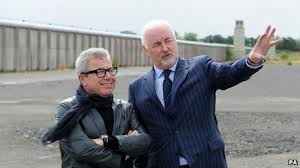 Architect Daniel Libeskind and Terence Brannigan at the maze prison

Daniel Libeskind, the architect selected for the project, has said it is an opportunity for Northern Ireland to show how far it has come.

Mr Libeskind oversaw the building of the 9/11 Ground Zero memorial in New York and the Jewish Museum in Berlin.

In January, planning approval was granted for the 347 acres to hold the new venue for the Balmoral Show, after it was announced it would no longer be held at the King’s Hall in south Belfast.