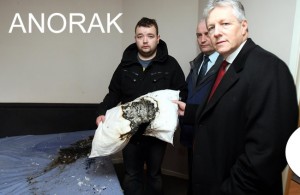 A FORMER DUP council candidate with links to the shadowy ‘Real UFF’ has been jailed for three years in prison for his role in a sectarian pipe bomb attack in Antrim.

The incident happened in October 2011 when a device was left at the home of a young Polish couple in the Steeple estate.

It happened just months after John Smyth junior had run for election to Antrim Borough Council.

It did not go off and it was later defused.

When he was charged over the attack, the DUP suspended him from the party.

Police suspect the attack was carried out by the ‘Real UFF’, a shadowy group linked to sectarian pipe bomb attacks in Antrim and south Derry.

And detectives suspect John Smyth jnr was closely associated with the ‘Real UFF’.

John Smyth Junior, of Rockfield Heights in Connor, near Ballymena, was sentenced to three years in prison and five years on licence on Thursday.

He admitted his part in making the pipe bomb after he was confronted with “overwhelming forensic evidence”, but denied planting it.

The judge said the motivation for the attack was “naked sectarianism”.

In March 2011, Smyth’s home was attacked with a pipe bomb.

The device was thrown through a bedroom window at the home of John Smyth Jnr in the Seacash area of Antrim at 4am.

A small fire broke out but was quickly extinguished by Mr Smyth, who escaped uninjured.

“I was sitting in the living room and I heard a large crash and a smash of my windows breaking and then a large bang like a firework going off,” Mr Smith, whose father currently holds a seat on Antrim council, said. 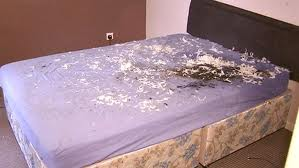 “I went to my hall where I seen smoke bellowing from my bedroom.

“I went into my bedroom and there was a fire and I put it out and noticed a pipe bomb device on the bed.

“I was on night shift the night before and I slept a bit too long during the day thankfully, if not I would have been in bed out for the count, and wouldn’t have been here today.

“I was in utter shock; I couldn’t understand why I had been targeted, because I have worked so hard for the local community.

“The only thing I can think of is I am a candidate in the local election, plus because of my stance on drugs.”