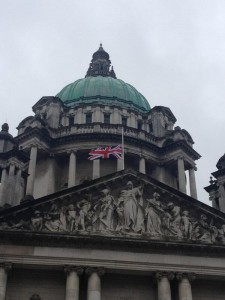 The old soldiers association said on Thursday that it is opposed to attempts to fly the Union flag at Belfast City Hall’s cenotaph every day of the year.

In a statement, the legion said its Garden of Remembrance was “sacrosanct” and it did not want it politicised.

The legion was responding to a proposal by DUP councillor Lee Reynolds to fly the flag at the cenotaph daily.

Last December, the council voted by 29-21 to restrict the flying of the union flag over city hall to designated dates in a compromise motion put forward by the Alliance Party.

But loyalists were outraged by the move and weeks of street protests, sometimes violent, ensued. A number of police officers were hurt during disturbances, several politicians received death threats and homes and property were damaged.

In a statement on Thursday, the British Legion said it did not want its Garden of Remembrance being drawn into the flags debate.

“As the nation’s custodian of remembrance, the legion is committed to helping everyone understand the importance of remembrance, so those sacrifices are never forgotten,” the statement said.

“Remembrance of all who have fallen should unite, not divide. It is sacrosanct and should not be politicised in any way.

“We would therefore oppose the Garden of Remembrance becoming involved in the flag debate for that reason and, in the interests of keeping remembrance free of controversy, cannot agree to any change to the current policy of flag-flying at the cenotaph,” it added.

DUP councillor Lee Reynolds had hoped Alliance would back his proposal, which is to be considered by the council’s policy and resources committee on Friday ahead of a full council meeting.

But council sources say Alliance has decided to oppose the move, as an equality screening found that there were equality implications.

In a statement, the Alliance Party said it was standing firmly behind its policy of flying the union flag at council headquarters on designated days and was called for the Northern Ireland Executive to legislate for this as a requirement for all councils.

Councillor Marie Hendron said: “”As we move forward in building a shared future for everyone, we believe this policy provides the best opportunity to enhance community relations.”

She said that her party had already written to the Department for Culture, Media and Sport (DCMS) to request that 1 July, the anniversary of the Battle of the Somme, be added to the list of designated days.

“Our request is that the addition should be either specifically for Northern Ireland or across the United Kingdom as a whole,” she said.

“Alliance will continue to lobby DCMS to ensure this date is added. However we must set a precedent by achieving this change through the proper DCMS channel and not just on a date-by-date vote by individual local council groups.”

Following the city hall decision in December, unionists attempted to push through a similar review extending the number of days the union flag is flown over Stormont’s parliament building.

Other Northern Ireland councils, such as Down district, fly their own flags.

The Department for Culture, Media and Sport has designated 18 days on which the union flag is flown in Northern Ireland in 2013. It may also be flown during the opening and closing of Parliament by the Queen.


One Response to BRITISH LEGION: DON’T FLY UNION FLAG AT BELFAST CENOTAPH IN OUR NAME