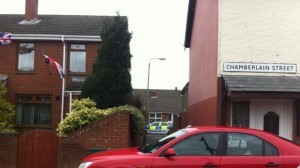 DETECTIVES probing the murder of Stanley McAuley in east Belfast on Sunday have charged a suspect.

The 41-year-old was found unconscious in an alleyway off Chamberlain Street following reports to police of a serious assault shortly after 1am.

Mr McAuley was taken to Royal Victoria Hospital where he later died from his injuries.

The man in his 30s was arrested on Sunday.

A 20-year-old woman was arrested on Sunday night and remains in custody.

The suspect will appear at Belfast Magistrates’ Court on Wednesday morning charged with Mr McAuley’s murder.