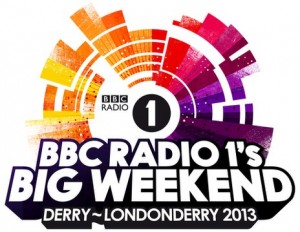 BBC Radio 1 says it will work to stop the secondary sale of tickets for its Big Weekend in Derry/Londonderry.

Tickets for the event went on sale on Wednesday morning but sold out within minutes.

And some of the tickets have already appeared on auction websites, such as eBay, at hugely inflated prices.

Radio 1 says it “reserves the right to cancel” any tickets sold on by people who got passes to the event in Derry.

The 37,500 tickets were snapped up in under an hour for the event, which will take place at Ebrington over the spring bank holiday weekend in May.

The full line-up has yet to be released, but Olly Murs and Two Door Cinema Club have been confirmed so far.

In a statement, a spokesperson for Radio 1 said: “Tickets for BBC Radio 1’s Big Weekend Derry~Londonderry are free and we work with those running major auction websites and sales outlets to have posts offering tickets for sale or trade removed.

“Those offering tickets for sale are breaking the Terms & Conditions they agreed to during the booking process and we reserve the right to cancel them.”