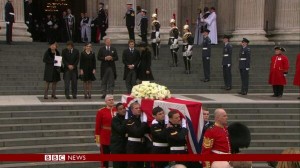 The funeral service has now ended in St Paul’s Cathedral in London for Baroness Thatcher who died last week aged 87.

Among the mourners is First Minister Peter Robinson and a number of other guests from Northern Ireland are attending the funeral of Baroness Thatcher in London.

Mr Robinson is representing the Northern Ireland Assembly at the service in St Paul’s Cathedral. 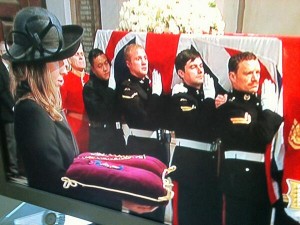 Following the service, her Union jack flag-draped coffin was carried from the cathedral where a hearse took it to St Mary’s Royal Infirmary in Chelsea.

The DUP’s William McCrea was one of the senior members of the Commons who received Lady Thatcher’s body into the crypt at Westminster on Tuesday.

The South Antrim MP said he disagreed with a number of Mrs Thatcher’s policies, particularly the 1985 Anglo-Irish Agreement.

“In politics there are things that people agree with and disagree with and I think Margaret Thatcher did acknowledge in her record of looking back over her life that she had regretted things about the Anglo-Irish Agreement,” he said.

“You can’t take away the fact that she was an outstanding political figure in the UK.

“She brought a distinction and respect internationally back to Britain, which hadn’t been there for some time.

“She was a person of renown – no-one can take that away from her.” 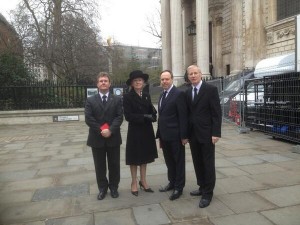 “It is a mark of a civilised society that we should be able to mark the passing of significant figures in a dignified way,” she said.

“There is a time and a place to discuss her legacy but on the day of the funeral there is a grieving family at the centre of this.

“She was a human being with family and friends and that is something you need to be respectful of.”

About 200 states, territories and international organisations have been invited to send an official representative.