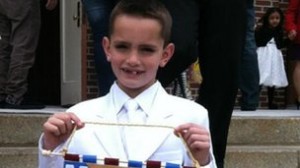 The youngest victim of the Boston marathon Martin Richard

THIS is the first picture release of Martin Richard who was killed in the Boston marathon bomb horror.

The eight-year-old was the youngest victim of the attack on Monday when two bombs detonated along the marathon route.

On Tuesday morning, police and FBI detectives searched an apartment in north Boston in connection with the bombings.

It is reported the apartment belongs to a Saudi nationals who is being treated in hospital for shrapnel injuries.

Reports in America said he gave his consent for the apartment to be searched.

At a press conference, the FBI said there were “no threats” and appealed for anyone with information about the explosions or had pictures/video footage to pass it over to special agents investigation the blasts.

Boston police commissioner Ed Davis said the investigation was “the biggest in the history of this department”.

He said the crime scene investigation had been reduced from 15 blocks to 12 blocks and hoped to have people returned to their buildings as quickly as possible.

The chief of the FBI investigation, Rick DesLauriers, says: “Our mission is clear: to bring to justice those responsible for the Boston Marathon bombings.”

The chief of the FBI investigation, Rick DesLauriers, says: “Our mission is clear: to bring to justice those responsible for the Boston Marathon bombings.”

Former world champion boxer Eamonn Loughran has revealed how he prayed for the safe return of his wife after two bombs exploded at the Boston marathon.

He was among a number of runners from Northern Ireland who were taking part in the Boston Marathon on Monday.

Two bombs exploded – one at the finishing line – within seconds of each other around 3pm Boston time. 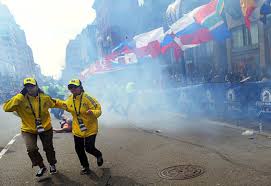 Among the critically and seriously injured were people who lost limbs from the force of the explosions.

The FBI has taken control of the bomb site investigation and US President Barack Obama vowed those behind the indiscriminate bomb blasts would be hunted down and brought to justice.

Ballymena man Loughran revealed how he had arranged to meet his wife Angela at the finish line where one of the bombs detonated.

“We had arranged to meet up by the flags,’’ said Mr Loughran.

“I went back to the hotel and prayed for three hours that she would be safe.

“We both burst out crying when she walked through the door.’’

He tweeted: “Relieved to confirm I have been contacted by a reliable source and told that my dear friend former WBC boxing champion Eamonn Loughran is OK.”

On Tuesday morning he thanked his followers on Twitter for passing on their messages that they hoped the one-time boxer was safe.

“Thanks all who got in touch last night re my concern over my good friend Eamonn Loughran in Boston,I will forward to Eamonn when I see him.”