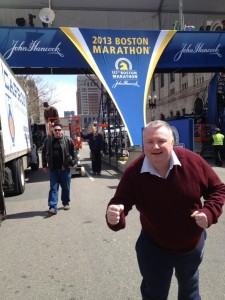 BBC personality Stephen Nolan has told his Twitters followers that he is safe and well following Monday’s double bomb blasts at Boston Marathon.

The Radio Ulster host has been in Boston for a few days.

However, he has tweeted on Monday night: “We are safe. We left yesterday.”

“I watched children doing a fun run at the Boston marathon – hard to imagine its the scene of so much devastation today.”