‘CARVE UP’ ROW AT ASSEMBLY OVER NEW DEPUTY SPEAKER MCLAUGHLIN 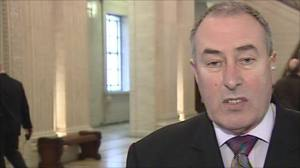 THE Assembly was embroiled in a DUP/Sinn Fein ‘carve up’ row at Stormont on Monday.

It follows the election of Sinn Fein’s Mitchel McLaughlin to the post of deputy speaker in the chamber.

A furious Basil McCrea accused the DUP and Sinn of a political “carve up” over the post.

There were heated exchanges at Stormont as the South Antrim MLA was voted in, with First Minister Peter Robinson first asking him to confirm his commitment to law and order.

The party described the poll as “dubious” and Mr McLaughlin said he was “disappointed” by the DUP leaders remarks, but said he is fully behind the peace process.

Mr Robinson said he was satisfied with the clarification.