TWO QUIZZED OVER DISSIDENT WEAPONS AND BOMB FIND IN DERRY 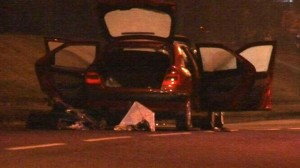 Police intercept dissidents onboard a car carrying a number of guns

POLICE believe they have foiled yet another dissident terror attack during a covert security operation.

Two men, aged 24 and 50, are in custody after police “rammed” a car on the Northland Road in Derry city centre around 8pm on Friday night following a surveillance operation.

The PSNI say two cars were stopped at the scene and a third car impounded during a follow-up operation.

Police a number of firearms and a quantity of ammunition were recovered from the scene along with a suspected pipe bomb.

Two suspects were seen being put on the ground by heavily armed police, handcuffed and put into white forensic suits before being taken away to the serious crime suite in Antrim for questioning.

Police have not yet confirmed or denied reports from the scene that an envelope or package may have been thrown from the car.

The Northland Road was closed for a period as police tasked Army technical officers to the scene following the discovery of a suspicious object in the car.

After an examination of the guns, the weapons were removed and the area declared safe for traffic to resume.

SDLP MLA for Foyle Mark H Durkan has praised the PSNI after the operation.

”There is certainly relief in the city today that another successful police operation has led to the removal from our streets of instruments of death and destruction,” he said.

“While it is alarming and depressing that there are still people out there intent on waging their warped war, it’s encouraging that the police have scuppered their evil intentions last night and on other occasions recently.

“I would like to commend the police on their good work which has prevented further crime and suffering. I would also praise the people of Derry for their patience and understanding during the follow up security operation.”

Last month, during a covert operation, police stopped a white van Letterkenny Road coming from the direction of Donegal which was being followed by a motorbike.

Inside the van, police found mortar tubes and the roof had been cut back.

The PSNI believed the target of the attack was Strand Road police station.