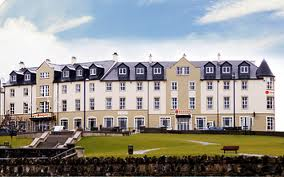 The Ramada Encore hotel in Portrush which is now in administration

THE administrator appointed to run the Ramada Encore Hotel in Portrush says it will continue trading.

On Friday morning, McClure Watters said in a statement that their immediate objective was to maintain operations and honour bookings.

It added that the hotel remains open for business but doesn’t state what the longterm plans are for the hotel, including a possible sale.

DUP East Londonderry MP Gregory Campbell said he feared the move could see the hotel sold at a significant discount.

He said it could mark the start of a so-called fire sale by Nama of properties it holds in NI.

Nama has always maintained it is not in its interests to have a fire sale in Northern Ireland.

So far, there has been no comment from the agency.

The news was met with shock by the owners and local politicians.

The 69-bedroom hotel has an annual turnover of £2.2m and has won several awards.

The owners were informed on Thursday afternoon that administrators had been appointed and will now run the hotel.

The 50 full-time and part-time staff have been informed.

The owners said that despite several requests, they had been unable to meet with Nama over the past few months.

In a statement on the hotel’s Facebook site, Alistair Kennedy said the business would trade as normal.

“We have been assured that all bookings and reservations are safe,” he said.

“The Kennedy family who have owned and operated the hotel for the past 11 years would like to thank all our customers and friends for the support and custom they have given us over that period of time.”

Mr Kennedy said he hoped customers would continue to support the hotel’s staff “during what is obviously going to be a very difficult period for all involved”.

Mr Campbell said the hotel was “quite crucial” to the causeway coast area.

“This is a well-run profitable establishment and the owners and many people in the community can’t understand why Nama has moved to put it into administration,” he said.

“Ian Paisley and I have been trying to get meetings this week with the banks that are operating with Nama and we’ve been unsuccessful.”

He said he could not understand why Nama had acted when the hotel was coming into its most profitable time of year.

“Over the course of the next four months, the profits for the next 12-month period in most tourist-related businesses will be generated,” Mr Campbell said.

“It was trading profitably over the Easter period and is also going to trade profitably between now and September.

“It seems an odd way to move but particularly in advance of any discussions to try and see can this operated in a better way.”

In October 2010, the construction arm of the Kennedy Group was placed into administration.

A list of properties which have been repossessed by Nama included an industrial site on Letterloan Road in Coleraine. This is believed to be the former premises of Kennedy Concrete Products.

It is not clear why Nama has now decided to take further enforcement action against the group.

DUP MPs Gregory Campbell and Ian Paisley have expressed concern at the administration move and said they hoped to raise the matter with Nama through Finance Minister Sammy Wilson in the days ahead.