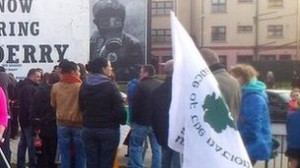 RIOTING has rioting has erupted again on the streets of Derry/Londonderry on Friday night.

It is believed republicans have been attacking police lines in the city.

At one point, around 100young people, some wearing masks, were gathered outside the Bogside Inn.

A fire was burning on the road at the bottom of the flyover.

As a result,  police have advised motorists to avoid Leckey Road, Rossville Street and Barrack Street area are of the city due to what the PSNI describe as “ongoing public disorder”.

It is the fifth night of trouble in the city.

Trouble first erupted after republicans took to the street for a ‘Thatcher Is Dead’ party.