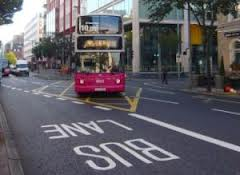 A NEW series of bus lanes will roll into use on Friday in Belfast city centre.

The lanes will operate from College Avenue and Collage Square East between Millfield and Wellington Place.

It is phase two of Belfast on the Move aimed at makinge the city more accessible for public transport and cyclists.

The 200m long lane will operate between 7am and 7pm on weekdays, and it will run alongside two other lanes of regular traffic.

Elsewhere, resurfacing work at the Grosvenor Road between Durham Street and Fisherwick Place will leave just one lane for eastbound traffic turning left into Fisherwick Place.

Meanwhile the lane markings on Howard Street will also change by Monday 22 April, and the Department of Regional Development say that will improve the flow of traffic.

Bus lanes throughout the city centre will be highlighted with red surfacing over the coming weeks.

“I would remind motorists to be aware of the new traffic management arrangements as they come into operation and to pay extra care and attention as they become used to them.”

The Belfast on the Move initiative caused traffic chaos in September 2012, when the first of the new bus lanes were unveiled.

Traffic came to a standstill throughout the city, leaving commuters angry that public transport has been given priority.