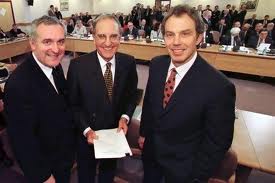 FIFTEEN years ago today, Northern Ireland made international healdines with the signing of the historic Good Friday Agreement.

Today, Prime Minister has hailed the Good Friday Agreement (GFA) as a “truly momentous event” in Northern Ireland’s history and a “massive step forward” for the province.

And one of the principle architects of the GFA, former Labour Prime Minister Tony Blair, said he felt “something momentus had been done” the day the deal was finally signed.

He told the BBC Nolan Show on Wednesday morning: “As I sat down on seat of plane the Queen called me to be very gracious and give her congratulations.”

After burning the midnight oil, the deal, also known as the Belfast Agreement, was signed on April 10, 1998 by the majority of the politicians.

Behind the scenes, people like US Senator George Mitchell were instrumental in bringing politicians together to bring an end to the violence.

Only the DUP, led by Rev Ian Paisley refused to sign up to it.

The deal followed years of intensive peace talks between political parties in Northern Ireland and the British and Irish governments.

David Cameron said over the past 15 years, Northern Ireland had “come a long way” but much remained to be done.

The SDLP said the Good Friday Agreement was a “seminal point in modern Irish history” and called for a public holiday to mark the anniversary.

Its leader, Alasdair McDonnell said it was a “unique exercise in democracy which mapped out the end to that conflict and laid the foundation stone on which the new Ireland for the 21st century will be built”.

The 65-page document paved the way for the establishment of a devolved government at Stormont and a copy was sent to every house in Northern Ireland.

Six weeks later, it was ratified by referenda on both sides of the Irish border, with 71% of people in Northern Ireland and 94% in the Republic of Ireland voting in favour of the deal.

In a statement on Wednesday, the Prime Minister said: “After decades of division and terrorism, the agreement heralded a new beginning for relationships within Northern Ireland, between Northern Ireland and the Republic of Ireland, and across these islands.

“At this distance it is easy to forget just how painstaking and lengthy the process was that eventually led to the agreement.”

Many unionists, particularly the DUP, were angered by the proposals and the party’s then leader, Ian Paisley, led a vigorous referendum campaign for a “no” vote.

The “no” campaign argued that plans for mandatory coalition, enforced power-sharing with nationalists, was anti-democratic.

They also said that proposals to increase cross-border co-operation with the Irish government would undermine British sovereignty.

Under the terms of the deal, paramilitary prisoners were granted early release which caused great distress to many victims of the Troubles and their families.

In his statement, Mr Cameron said that although the agreement was not perfect, it was “a massive step forward from what had gone before, a clear manifestation that politics and democracy would triumph over violence”.

He said the architects of the agreement, and those who “displayed remarkable political courage in pushing it forward” deserved thanks and should “not be shy” about trumpeting its achievements.

“There is still a strong tendency in Northern Ireland to view politics as a zero sum game, in which there are only winners and losers,” Mr Cameron said.

“That is not the case with the Belfast Agreement. I firmly believe that all parts of the community were winners on 10 April 1998.”

The prime minister said Northern Ireland’s best days still lay ahead and described the accord as “the platform to build a new, confident, inclusive and modern” society.

The SDLP leader said agreement still provided the “best hope, perhaps the only hope, of creating and shaping a reconciled and prosperous society”.

Mr McDonnell said: “The Good Friday Agreement transformed relations between our peoples and our nations. It truly is the people’s agreement, endorsed overwhelmingly in the only true exercise in national self-determination since 1918.

“It is a seminal point in modern Irish history which defines our values, ambitions, institutions, our political system, and the potential to build a new society.”