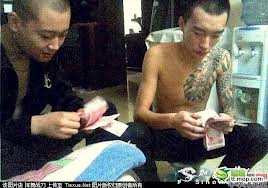 A CHINESE Triad gang may have used the postal system to launder and transfer up to £1million in drugs money, the High Court has heard on Wednesday.

Prosecutors revealed the alleged operation involved packages being sent between London and addresses in Belfast.

Counterfeit Chinese passports and nearly £70k in cash were seized during searches at one property in the east of the city last month.

Details emerged as bail was refused to a man claimed to be a highly-trusted member of the organised crime gang behind the racket.

Wen Zyang, 23, of no fixed address, is charged with possessing criminal property and false identity documents.

All of the alleged offences occurred between December last year and March.

“Police believe that approximately £1million from this diary has been paid.”