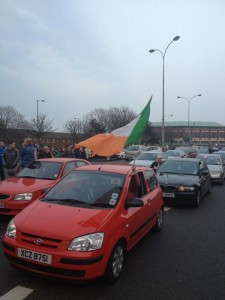 REPUBLICANS have taken to the streets of west Belfast in large numbers on Tuesday night following the death yesterday of Margaret Thatcher.

Cavalcades of cars have been driving along the Falls Road towards Divis Tower for a 7pm gathering which republicans have called a ‘Thatcher Is Dead Party’.

It had been arranged on social network sites.

The traffic in the area has come to a standstill and events are being monitored by the PSNI’s ‘Hawkeye’ helicopter.

One local said: “I haven’t seen crowds like this on the Falls Road in many a year. It is unbelieveable.”

On Facebook, republicans were urged to turn out in numbers, bring flags and bin lids.

On Tuesday night, Union flag protests have restarted at Woodstock Link, in east Belfast and at Hope Street and Sandy Row in south Belfast as a result of the so-called republican ‘street parties’ over the death of Baroness Thatcher.

The so-called ‘street parties’ have been condemned by unionist politicians as ‘depraved’ and ‘ghoulish’.

Sinn Fein refused to condemn the street demonstrations. North Belfast Sinn Fein MLA Gerry Kelly said he would not be taking part in them. 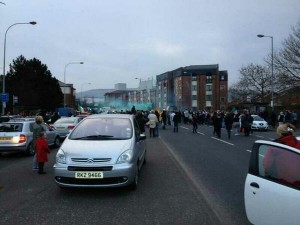 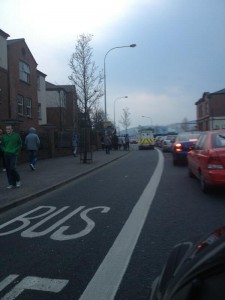 
4 Responses to ‘THATCHER IS DEAD’ PARTIES CONTINUE IN WEST BELFAST