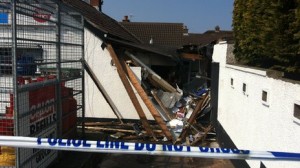 DETECTIVES are on the trail of a gang who used a digger to ram the wall of a post office on the outskirts of east Belfast.

The attack happened at around 2 am on Tuesday, causing substantial damage to a wall and the roof of the property at Hillmount Drive.

The police said a substantial amount of cash was taken during the digger raid.

The post office will remain closed until the premises is made safe.

The digger was stolen in the Ballystockart Road area of Comber, Co Down earlier in the night.

DUP MLA Jimmy Spratt condemned the incident saying it was an “attack on the whole community” in Moneyreagh.

“The shop and post office at Moneyreagh are at the heart of the community in the area and are widely used by many people including older people and those from the rural community.” he said.

“It is shocking that a digger was used to knock down the annexe at the back of the post office and I understand it hasn’t yet been possible to ascertain if the safe has been stolen due to the amount of rubble.

“If anyone sees suspicious activity near a post office, especially in the early hours of the morning, it is imperative they contact police immediately. ”