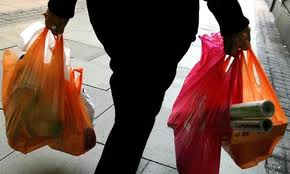 SHOPPERS in Northern Ireland now have to pay 5p at the tills for a plastic bag.

The tax introduced by the Department of Environment came into force on Monday and it aims to cut waste.

Each single use plastic bag comes with a charge which is set to double next year.

A levy was introduced in the Republic of Ireland almost 10 years ago, while Wales also has a carrier bag tax.

People in Northern Ireland use 30,000 carrier bags every hour, and Environment Minister Alex Attwood is hoping for an 80% reduction.

He said: “I believe we can quickly adjust to the levy.

“People tell me they are concerned about climate change and want to find ways to make personal, family and local contributions to addressing the threat. The levy is precisely this.

“Shoppers can completely avoid paying the levy by bringing their own bags when shopping.

“Whether it’s a ‘bag for life’, a canvas bag, or just an ordinary plastic carrier bag, it all helps the environment by using less raw materials, reducing carbon emissions and reducing air and water pollution. This is what the levy is all about.”

The revenue raised from the plastic bag tax will fund voluntary and community groups working on sustainability projects.

Environment groups say the levy does not go far enough, while small businesses fear it could have a negative impact on them.

Glyn Roberts, from the NI Independent Retail Trade Association, said they agree that the number of carrier bags in circulation should be reduced, but also expressed concern about the red tape involved.

He said: “We believe that sensible changes to the scheme, such as capping it at 5p, letting retailers distribute the levy proceeds to local charities as is the case in Wales and dropping some of the ridiculously high fines should be made.

“NIIRTA is concerned that the collecting and administration of the levy may pose a real burden on our members and we will be closely monitoring this over the next few months.”