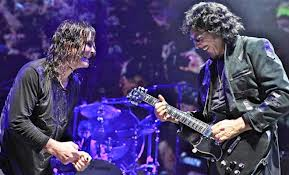 THEY wowed thousands with their comeback performance at Donington Park last year as part of the 2012 Download Festival.

Now, with the release of new album “13″ on the horizon, the mighty Black Sabbath have announced a set of shows for the end of 2013.

The tour will comprise six shows across England, Scotland and Northern Ireland, kicking off at The O2 in Greenwich, London on the 10th of December and finishing up with a homecoming show at the LG Arena in Birmingham on the 20th.

There are also shows planned to take place on the European mainland at the end of November.

Tickets for the tour will go on general sale this coming Friday (12th of April).

Pre-sale tickets may be available through O2 as early as Wednesday for O2 customers and keep an eye out for any venue pre-sales too.

Prices for this huge tour will range between £45 and £55 plus the usual booking fees.


One Response to BLACK SABBATH TO PLAY BELFAST IN DECEMBER