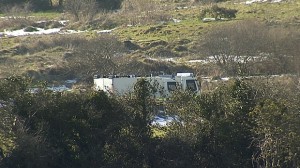 Five men and a woman were arrested fuelling speculation within dissident republican ranks that one of those detained is an informant who tipped off police about a possible terror attack.

A security alert was sparked in the Barnfield Road area of the city on Friday.

Police called in Army technical officers who carried out a clearance operation which ended shortly after 6pm on Friday night.

Earlier, two men, whose identities are known to Belfast Daily, were arrested by detectives from the PSNI’s Serious Crime Branch in the area overnight.

They are currently being held in the Antrim Serious Crime Suite for questioning.

Three men arrested in west Belfast and a woman who was detained in Dunmurry, as part of a major investigation into dissident republican activity, have been released without charge.

Dissident republicans are said to be “highly suspicious” about the large number of arrests.