SARACENS V ULSTER: BOWE BACK IN SQUAD FOR HEINEKEN CUP 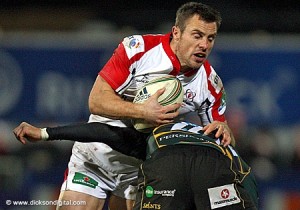 TOMMY Bowe has boosted Ulster’s morale after being named in the match day squad to face Saracens in the Heineken Cup Quarter-Final at Twickenham tomorrow evening (kick-off 6.30pm).

The Ulster winger has now recovered his injury almost four months ago which has kept on the sidelines for both club and country.

The Ireland international hasn’t played since he suffered knee ligament damage against Northampton in December and is named on the bench for the game.

All Black tight-head prop, John Afoa, returns to the starting XV after he missed the win over Leinster at the RDS as he was in New Zealand for the birth of his third child.

There are two further changes to the team that recorded Ulster’s first win in Dublin since 1999 for the Quarter-Final clash with Saracens.

Iain Henderson is preferred at blindside flanker to Robbie Diack who drops to the bench, while Luke Marshall starts at inside-centre having recovered from the concussion that he sustained playing for Ireland against Italy in the RBS 6 Nations.

Ulster Head Coach Mark Anscombe is delighted to have Bowe back in the squad:

“Tommy has trained very well. He is chomping at the bit to get out there – he has missed a lot of rugby and he wants to play,” says Anscombe ahead of Saturday’s game at Twickenham.

“We want to accommodate him because he is a world-class player. It is a credit to our Head of Strength and Conditioning, Jonny Davis, and to Gareth Robinson, Alan McCaldin and the rest of our medical staff that he is ready.

“We’re playing in the quarter-final of a great competition, at one of the best grounds in rugby, against the side leading the Aviva Premiership and there’s going to be a big crowd. It doesn’t get any better than that.”

More than 35,000 tickets have been sold for the match.

Tickets are still available via Ticketmaster. Tickets can also be purchased tomorrow at the RFU ticket office at Twickenham from 2pm.