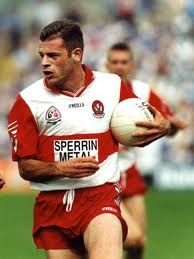 ANTHONY Tohill has sustained serious facial injuries in an accident at his home.

It is believed the former Derry GAA player was working with a chainsaw in his garden when the incident happened earlier this week.

The 41-year-old was hospitalised with his injuries but has since returned home.

“Tough for him to get used to but v strong mentally.”

Mr Tohill was a member of the 1993 All-Ireland winning Derry team and was manager of the Ireland International Rules team in 2010 and 2011.

He is a senior official at Derry City Council.