CHILDREN PUT AT RISK OVER DISSIDENT REPUBLICAN PARADE IN BELFAST 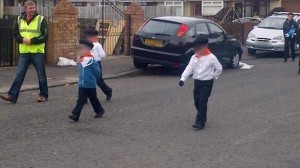 ADULTS who allowed young children to take part in a dissident republican parade in which a hooded gunman fired shots have been branded as “irresponsible”.

During the parade, a masked and hooded gunman appeared in a side street, aimed a handgun into the air and fired a number of shots.

During the show of strength by dissident group Oglaigh na hEireann (ONH), children  under the age of ten were pictured wearing paramilitary-style clothing for the parade.

Detectives from the PSNI’s Serious Crime Branch are investigating the YouTube footage.

Children’s Commissioner Patricia Lewsley-Mooney has revealed on Friday that she has spoken to police about the images of children marching in the parade.

She said: “This specific incident caused me concern that children are being put in this vulnerable position.

“But I think what we need to look at the broader issue of how irresponsible adults are putting children across NI into vulnerable situations and very often at risk, with regards to their own safety.”

Mrs Lewsley-Mooney said she has also discussed her child safety concerns with Social Services, adding that parents should be held account.

She spoke on Friday morning, following a meeting with DUP politicians who have expressed their outrage at the incident.

Nigel Dodds, MP, said: “We are all appalled at the images we saw on our television screens with shots being fired as these young children stand by dressed in these paramilitary uniforms.

“We will certainly be pursuing this matter very, very strongly.”

Mr Dodds said parents “need to be brought to book” over their actions in permitting children to take part in the parade.

He added that the incident was completely different from children taking part in Union flag protests.

“I think there’s a particular outrage about those who are being used to glorify terrorism and paramilitarism.

He said: “That’s in a different category altogether.”