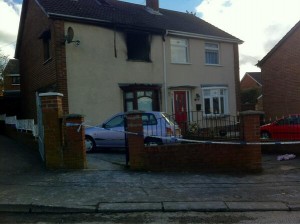 NEIGHBOURS frantically tried to save a woman from a fierce blaze which licked its way through her west Belfast home.

One man beat down the front door of the semi-detached house in Lenadoon Avenue with a hammer in a desperate bid to pull the woman to safety.

Fergal Maguire tried tried to rescue the woman as the fire reached the loft of the house.

He said he ran across to help after his son alerted him to the fire.

“When I got there, there was a young fella and another boy, another neighbour who were in the hallway of the house and basically the three of us tried to get up the stairs.”

Mr Maguire said they tried a few times to get up the stairs with no success.

“On the last attempt we got up the stairs, the ceiling collapsed and basically we got half way up the stairs- one of the neighbours was starting to choke and get the effects of the smoke, so I took the decision and said to everybody ‘get out, it’s too late’.

“We managed to get out of the house and I’m very sorry to hear of the consequences of what had happened in the end, but we did try our best, it’s just a pity we couldn’t get to the woman.”

Mr Maguire said that if they had reached the top, they would probably have ended up in trouble as the room seemed like an “inferno”.

He said he was distressed to see the woman’s son had arrived at the scene when the group came back out of the house.

“I suppose when all is said and done at that point in time, you sort of knew to yourself ‘ I’ve done my best and I can’t do any more’.”

The victim, a mother in her 40s, was in the upstairs attack of the house when the fire broke out around midnight.

A number of her teenage sons also tried to pull their mum out but were prevented because of the intensity of the fire.

Police and fire investigators spent Thursday morning sifting through the debris to find a cause of the blaze.

Police and the Fire and Rescue Service are investigating the cause of the blaze.