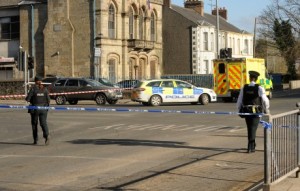 A 43-year-old man has been arrested after a pensioner was knocked down and killed in Co Tyrone.

The victim, who was in his 70s, was fatally injured while walking in the Sedan Avenue area of Omagh on Wednesday morning.

The crash, which also involved a green Volvo XC 90, happened at around 8.20am.

Police have appealed for anyone who saw the crash to contact them.

The man, who has been detained for motoring offences, is currently assisting police enquiries.