GAME OF THRONES: FOURTH SERIES TO BE FILMED IN NORTHERN IRELAND 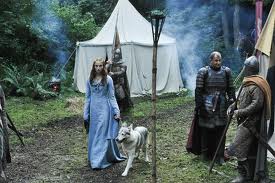 NORTHERN Ireland will be used to film a fourth series of the hit TV fantasy drama Game of Thrones.

Produced by American film company HBO, the third series premiered in the UK on the Sky Atlantic on Monday, April 1.

First Minister Peter Robinson and Deputy First Minister Martin McGuinness said they had received confirmation that HBO had commissioned Game of Thrones for a fourth season.

NI Screen, Invest NI and the European Regional Development Fund will fund it.

Mr Robinson said: “Securing the filming of series four is proof that Northern Ireland can host large-scale productions with positive spin-off into other sectors such as tourism, where we can showcase stunning locations such as the Causeway Coast and the Glens, Ballintoy and Murlough Bay, to name but a few.

“The success of Game of Thrones shows our commitment to leave no stone unturned when seeking to secure such international productions.

“We travelled to Los Angeles to press the case for the Northern Ireland film industry and to encourage HBO to return to film their fourth series.

“We have seen the economic impact of an estimated £65m across the three seasons and we want to grow our local film industry to attract more international projects of this scale.”

Mr McGuinness said: “Meeting with HBO senior executives at the launch of Game of Thrones series three in Los Angeles last month shows we are prepared to go the extra mile to secure such an internationally renowned production for our local film industry.

“The credibility associated with a project of this scale has significant potential for our economy.

“A very important part of this large-scale inward investing production is the training and skills development for the local industry. 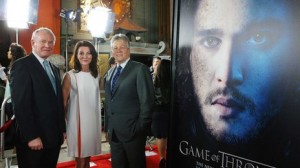 “We are focused on maximising the economic value of series four and building on the employment levels of the previous series where over 800 people were working on the production.

“NI Screen is working in partnership with the NI Tourist Board and Titanic Belfast to exploit the success of HBO’s production through the Game of Thrones exhibition in June.”

Major parts of the first three series of the medieval fantasy drama were made in Northern Ireland with the assistance of £9.25m in grants.

Production for seasons one, two and three of Game of Thrones was based in Belfast with filming in the Titanic Studios and at locations across Northern Ireland including the North Coast, Tollymore Forest Park, Castle Ward, the banks of the Quoile and the ruins of Inch Abbey in Downpatrick.

Parts of the series were filmed on location in Malta, Croatia, Iceland, and Morocco.