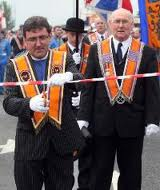 A Presbyterian minister once tipped to be a future Grand Master of the Orange Order has been suspended from his ministry.

And Rev Stephen Dickinson has been told to stay away from his former churches.

Rev Dickinson is the minister of Cairnalbana and Glenarm Presbyterian churches.

It is understood that most of the Cairnalbana elders have also been removed from office.

Rev Dickinson has been given 18 months to vacate the manse and put his affairs in order.

A Judicial Commission of the Presbyterian Church has ended his ministry and suspended him immediately.

Rev Dickinson will receive a salary until that period comes to an end.

According to the Ballymena Guardian, a breakdown in the relationship between the minister and elders of the Cairnalbana church over the last ten years has led to the decision.

The churches will now start to look for a new minister.

Two years ago Rev Dickinson quit the Orange Order after he accused the Grand Lodge of Ireland of “betraying its roots”.

He was a grand chaplain and a deputy grand master of the Orange Order of Ieland.