ONE POINT FOR REDS TO CLINCH DANSKE BANK LEAGUE TITLE 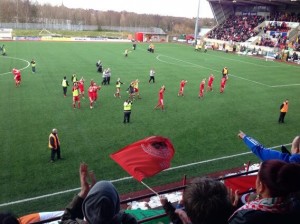 THEY have been the team to beat and catch most of the season.

And after their 3-1 win of second placed Crusaders on Easter Tuesday, Cliftonville have proved they will be worthy winners of the Danske Bank Irish Premier League in the coming weeks.

All the Reds need now is one point from the home match against across town rivals Linfield and the trophy will be arriving at Solitude for the first time in 15 years.

Despite going 1-0 down early one, Cliftonville beat their north Belfast rivals Crusaders at Solitude with a convincing display.

It pleased manager Tommy Breslin who urged his team before the Easter Tuesday game to give one more push this week.

The Reds lead the Crues by 14 points at the top of the table and need just one point from their remaining five games.

Timmy Adamson put Crusaders ahead in the first half but second-half goals from Liam Boyce (2) and Barry Johnston sealed victory for Tommy Breslin’s men.

The first chance of the game fell to Paul Heatley when his drilled shot brought a fine save from Conor Devlin and Matthew Snoddy went close from the rebound.

Soon after, a defensive mix-up allowed Adamson to slot home his 22nd goal of the season in the 14th minute.

A fine challenge by Paul Leeman on Stephen Garrett prevented a probable goal in an entertaining end-to-end first half.

Cliftonville levelled on the hour mark when Boyce floated a free-kick over the Crusaders wall and beyond goalkeeper Yohann Lacroix into the middle of the net.

The Reds edged ahead on 67 minutes when Josh Robinson failed to clear and the ball fell to Johnston, who knocked the ball past the keeper.

Eddie Seydak fired over late in the game and then Boyce chipped Lacroix in added time to put his side within touching distance of the top prize in Irish League football.

“We’re nearly there and I just want that one point to get us over the line,” admitted Breslin after the match.

The sides will meet again in an Irish Cup semi-final at the Oval on Saturday.