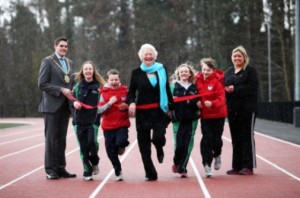 OLYMPIC gold medallist Dame Mary Peters hopes a multi-million upgrade to an athletics named in her honour will inspire a generation of winners.

The revamp includes a new eight-lane track, a field events area and a floodlit spectator stand at the facility in Malone, south Belfast.

“I congratulate and thank the council for their investment, which I am sure will contribute to the future sporting success of athletes from Belfast and Northern Ireland,” said Dame Mary.

“I am thrilled with what I have seen and especially pleased that this will continue to be a legacy for future generations.”

In its heyday, the Mary Peters Track, which was built as a tribute to the pentathlete’s success at the Munich Games in 1972, attracted some of sport’s biggest names.

During the 1980s and early 1990s thousands of people flocked to see the likes of Linford Christie, Geoff Capes, Fatima Whitbread and Zola Budd compete.

It is hoped the new track will draw similarly huge crowds to the World Police and Fire Games this summer.

Belfast Lord Mayor Gavin Robinson said: “Winning the bid to host the 2013 World Police and Fire Games provided Belfast with the catalyst to look at updating the venue.

“Suddenly we had to ensure we had the facilities to host what is second only to the Olympics in terms of the number of competitors and events.

“That proved the catalyst for Belfast City Council to invest £3 million and upgrade the facility. Today we can all look around us and see the result of such an inspired decision.

“This upgraded venue will attract international events but of equal importance is the fact that these are for the people of Belfast. They are for young people to help develop their skills and hopefully enjoy future success in the athletics field.”