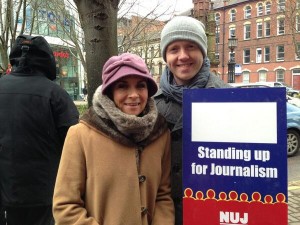 BBC staff in Belfast have started a 12-hour strike from mid-day on Thursday in a continuing row over job cuts, workload and claims of bullying.

They have joined their BBC colleagues across the UK who downed tools at lunchtime and walked out onto the picket line.

Members of the National Union of Journalists (NUJ) and Bectu, representing technical staff, voted in favour of the walkouts earlier this month.

The latest action follows a 24-hour strike by NUJ members on 18 February.

The unions said the strike would affect programmes, including news bulletins. The BBC said it was disappointed at the action and apologised for disruption.

The BBC News and BBC World channels both switched to a pre-recorded broadcast at 12 noon, when the strike began.

The corporation is cutting about 2,000 jobs over five years as part of its Delivering Quality First (DQF) programme.

The jobs will be shed mostly through voluntary redundancy, but 110 staff have been made compulsorily redundant.

The unions have called for a six-month moratorium on further post closures to allow for a review of workplace issues – but the BBC has said this would increase the savings it eventually has to find.

The unions also said they had submitted a dossier detailing “shocking levels” of bullying and harassment to an internal BBC inquiry, called Respect at Work, being conducted by Dinah Rose QC.

The NUJ vote was 61% in favour of stoppages, while backing among Bectu members was 56%. 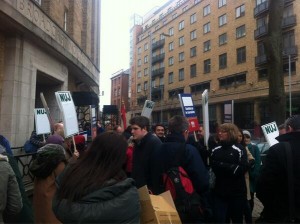 Michelle Stanistreet, general secretary of the NUJ, said workers were sending a clear message to the BBC that it needed to address problems created by the “ill conceived and badly implemented” cuts.

“It is disappointing that once again the BBC has decided not to properly engage, refusing our call for a moratorium to give space for meaningful discussions on the worrying impact of the cuts.

“The DQF plans remain on the table, regardless of the consequence for workload and stress levels,” she said.

“We know that the cuts are already having an impact on the quality of work. We know that it is leading to unacceptable workloads and stress.

“We know that management is using DQF as a means to harass and bully staff – making worse an already entrenched problem of bullying that has been largely ignored by those in positions of power.”

Gerry Morrissey, general secretary of Bectu, said: “Our members are suffering because the BBC thinks it can deliver the same levels of output with many fewer staff.

“The reality is that excessive workloads caused by massive job cuts are already taking their toll with staff reporting more stress, more bullying and more harassment.

“The BBC has a duty of care which it is not exercising currently and it is great pity that strike action is needed to make senior managers take the issues seriously.”

NUJ members staged a 24-hour walkout in February that changed some schedules and disrupted news output including BBC Breakfast and the Today programme on Radio 4.

The BBC said it was “extremely disappointed” the unions had gone ahead with the latest strike action and apologised in advance to audiences for any disruption to services.

It has said “constructive meetings” had been held with the unions in recent weeks but its position on compulsory redundancies remained unchanged.

“We must progress with those given the significant savings we have to make and strike action simply will not change this,” a spokesman added.