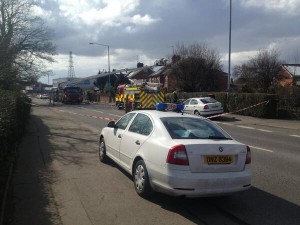 AN investigation is underway to discover the cause of a fire at two houses in south Belfast on Wednesday morning.

The fire broke out in the roof space of a semi-detached property on the Upper Lisburn Road at 11.16am.

It soon spreading to an adjoining house.

Seven fire appliances, including an aerial ladder platform, were called to the scene of the roof top blaze.

It took crews almost four hours to put out the loft fires.

Extensive damage was caused to both houses however there was no one inside either at the time, and there were no reports of injuries.

The road was closed at is junction with Ormonde Park for a time but later reopened.