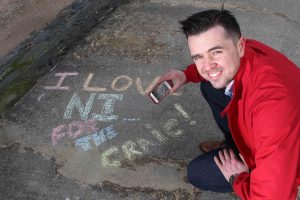 PEOPLE who love taking pictures on their phones are being asked to take part n the Northern Ireland Tourist Board’s (NITB) new interactive photo competition aimed at capturing the best of Northern Ireland on camera.

The online game, ‘MyNI’ will offer users the opportunity to win a range of fantastic prizes by completing a series of innovative tasks throughout Northern Ireland by taking photographs of special places,fun challenges or unique one chance moments and uploading them online.

Developed in partnership with the University of Ulster, as part of ongoing research by Alan Hook at the Centre for Media Research, the game is the first of its kind in Northern Ireland.

And it will see those taking part photographing everything from their favourite Ulster Fry and a pint of the ‘black stuff’, to hitting the beach in the North Coast and visiting Derry City’s Walls and the Fermanagh Lakelands.

Other players will reward points to the photos with prizes on offer including overnight stays, cookery vouchers and family passes into attractions throughout Northern Ireland.

All entrants taking part in MyNI will also be put on a leaderboard and the person with the most points and completed tasks by May 9 will be awarded with a luxury guided trip around Northern Ireland.

The prize will see the winner and a partner visit Belfast, the Causeway Coast and the city of Derry and enjoy an overnight stay in the five-star Merchant Hotel, a Rolls Royce chauffeur to a tour of Titanic Belfast, entrance to the Giant’s Causeway, a spa treatment in the City Hotel in Co. Londonderry and much more.

NITB has also teamed up with Cool FM’s Pete Snodden to launch the game and he will be playing along and promoting the game on air.

Social and Digital Marketing Manager of NITB, Kathryn Pyper, is encouraging everyone to take part in the game.

“The aim of the game is to encourage people to get out and about in Northern Ireland and to capture its beauty for everyone to see,” said Kathryn.

“We are challenging people to explore the world around them and will be asking users to complete a range of fun and quirky tasks which will help them explore different areas of Northern Ireland and hopefully discover something new on their own doorstep,” she continued.

“Anyone can take part and it doesn’t matter if you take the photo on your digital camera or mobile phone, it’s all about capturing special places and enjoying new experiences.

“There are some fantastic prizes up for grabs so make sure you get creative and remember the more times you play the game, the higher chance you have of winning,” Kathryn added.

For more information and to win amazing short breaks or prize packages, sign-up now at myni2013.com