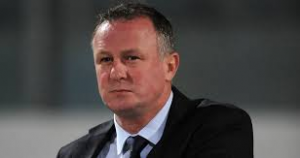 AFTER a five-day wait, Northern Ireland fans finally got into a bitterly cold Windsor Park to cheer on their team on Tuesday night.

Friday night’s home match against Russia was postponed because of the snow. On Saturday, the match was called off because the pitch was frozen.

So the stage was set on Tuesday night for Northern Ireland to put on a display to warm up the foundered loyal green and white army fans bracing the icy cold night on the south Belfast terraces.

Before kick off fans observed a minutes silence to the legendary journalist and fervent Northern Ireland supporter Malcom Brodie who passed away recently.

But the 2-0 scoreline to Israel was a disappointing result for manager Michael O’Neill who fans believe left his substitute changes too late again in the game to make a difference to his team’s fortunes.

After the game O’Neill admitted his team rued their missed chances.

“The key is when you are on top in games you must capitalise on the chances you get,” said O’Neill.

“In the first half we created chances but didn’t take them, so we make life very difficult for ourselves.”

“We got caught cold again on the counter-attack on two occasions – ultimately we have lost a game where we should never have lost.

“I thought we were excellent in the first half and we had some really good possession.

“But we didn’t play as well in the second half and we got bogged down a bit.”

The defeat against Israel came after three successive 1-1 draws – with a point in Portugal coming in between identical results at home to Luxembourg and Azerbaijan.

O’Neill said: “There’s been a pattern with us dominating sections of games – we’ve been in strong positions in our three home games in qualifiers but not capitalised.

“At this moment in time we are finding it difficult to win games. The mental side of the game to get that little bit extra to win matches at this level – it is just not there at this minute in time.

“However, we just have to persevere, work hard and change it.”

Captain Steven Davis went closest to getting his side on the scoresheet, but with three points from five matches in Group F and a winless run of 13 games their prospects looke grim.

Israel produced the first meaningful attack of the match in the fourth minute and could have scored from it.

A short corner routine slightly wrong-footed the home defence and when Bebras Natcho crossed for Swansea’s Itay Shechter, he hit the outside of the near post with a first-time effort.

Northern Ireland started slowly, a couple of hopeful long balls from the back leaving the front men too much to do.

Shane Ferguson’s enthusiasm lifted his side though, one neat flick for Steven Davis and a teasing cross doing the job.

With 18 minutes gone a lengthy passing move led to Davis playing in Paterson, but he was outmuscled by Tal Ben Haim.

Another promising move, started by Davis’ quick feet and also including a perfect cross-field ball from Chris Brunt audibly lifted the crowd.

Brunt followed up with a testing free-kick into the area, Ben Haim clearing to deny the lurking Jonny Evans.

Brunt was involved again on the half-hour when his low shot inadvertently found Paterson at the edge of the box, though his instinctive touch bobbled wide.

Northern Ireland’s industry almost earned them a goal a minute later when Paterson battled to win possession on the byline and cut the ball back to Davis.

The skipper looked sure to convert from six yards, but goalkeeper Dudu Aouate saw a powerful shot hit him flush in the face before Ferguson’s reaction header was swept from the line by Yuval Shpungin.

Follow up efforts from Brunt and Aaron Hughes were blocked and the chance was gone.

They continued to press without reward, Gareth McAuley’s drilled ball across the six-yard line going unconverted despite numerous bodies in the box.

The second half started slowly, Northern Ireland doing most of the pressing but without creating anything concrete.

Then, seven minutes after the restart, Israel almost caught their opponents out.

Shechter intercepted a throw-in and when Eden Ben Basat fed Maor Melikson, Roy Carroll needed to be alert to save at his near post.

Davis then went close to a stunning opener in the 59th minute after McGinn’s pacy counter-attack drove his side forward.

The Southampton midfielder took down a loose ball with aplomb and then sent a 20-yard rocket inches wide of the top corner.

Paterson twice appealed penalties unsuccessfully, Ben Haim and Aouate both cleared by the referee after seeing the striker go to ground.

Neither case looked compelling, but Paterson was aghast.

Then, in the 77th minute, Israel defied the run of play to take the lead.

Israel substitute Refaelov was the scorer with a delightful finish across Carroll, having been teed up by a smart one-touch pass from Shechter.

O’Neill sent on Pat McCourt and David Healy in a bid to change his side’s fortune but instead they leaked a second six minutes from time.