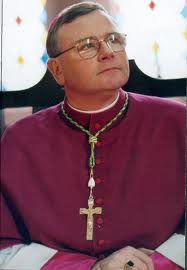 CONTROVERSIAL Catholic ‘Bishop’ Pat Buckley is to try and have immigration offences linked to a ‘sham marriage’ investigation thrown out of court.

Pat Buckley’s lawyer revealed in court on Tuesday that he would be challenging prosecution moves to have him sent for trial.

The 60-year-old rebel priest is one of four people accused in connection with alleged attempts to breach immigration laws.

The alleged offences were committed on dates between 2007 and 2009. Bishop Buckley did not appear as the case was mentioned at Belfast Magistrates’ Court on Tuesday.

But his lawyer, Joe McVeigh, confirmed he will be mounting an application to have proceedings discharged on the basis of insufficient evidence.

A similar legal move is to be made by one of the co-accused, immigration adviser Lily Braid.

Braid, 54, of Beechfield Crescent, Bangor, Co Down, is accused of three counts of assisting unlawful immigration.

District Judge Harry McKibbin agreed to adjourn the case for two weeks to set a date for the challenge to be heard.

Last year, summonses for the Belfast Magistrate’s Court hearing were issued to 16 people.

The charges allegedly relate to alleged offences between January 2004 and September 2009.

The marriages under investigation by the Northern authorities include a number conducted in a hotel just south of the border at Ravensdale in County Louth.