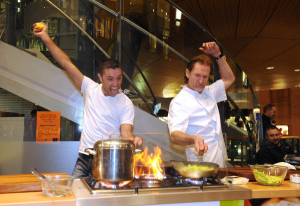 Paul Rankin cooking up delights in his Cayenne restaurant

IT was one of Belfast’s best known restaurants serving up Michelin standard food.

Now Cayenne in Shaftsbury Square has served food to the pass for the very last time after hitting hard times.

On Sunday night, Paul Rankin closed the doors to Cayenne – once named among the UK’s best restaurants – for the last time.

As a result, 18 full and part-time staff lost their jobs when the lease on the Shaftesbury Square restaurant was not renewed.

Roscoff closed amid financial difficulties, a decade after it first opened with the business going into a company voluntary arrangement (CVA) with its creditors.

Paul Rankin, star of Ready, Steady, Cook, Saturday Kitchen, and the Great British Menu, said the decision to shut Cayenne was the result of difficult economic times, adding that the Shaftesbury Square site was no longer sustainable.

“The once ‘golden mile’ of Belfast has suffered badly from a lack of regeneration and a general decline in popularity and appearance, even the Ulster Bank with its gable end statues across from us is to close shortly,” he explained.

“Location is key in the restaurant business, particularly at a time of economic downturn, and our current setting is no longer sustainable.

“The disturbances around the flag protest, particularly during the Christmas period, also confirmed our decision,” Mr Rankin added.

The chef is planning to open a new restaurant, which he said will be inspired by both Cayenne and Roscoff.

“There has already been some high level talks taking place about other exciting business and restaurant opportunities but I am open to identifying as many different options as possible so it really is too early to confirm any details as yet,” he said.