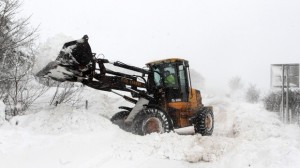 NORTHERN Ireland Electricity say that 800 homes and businesses are still without electricity on Monday morning.

NIE said it had worked to restore power to more than 137,000 customers over the weekend.

Thousands of homes and businesses lost their supply due to strong winds and heavy snow last week.

Most of those still affected are in rural areas in eastern and northern counties.

Repair teams are having difficulty reaching some parts due to “impassable roads”.

“We’re working with Roads Service to get roads cleared but in some areas we are going to have to helicopter crews and materials in,” said NIE spokeswoman Julia Carson.

“At the moment we’ve got small pockets of customers, really on high ground in and around, Stoneyford, Dundrod, Mallusk, areas of Ballycastle, Newcastle, and other areas of County Down as well.

“We have over 140 extra lines staff from the Republic of Ireland and Scotland and they’ve been helping our emergency crews on the ground. There are just some areas where we cannot physically get to the faults.”

Small groups of customers are without supply in the following areas: 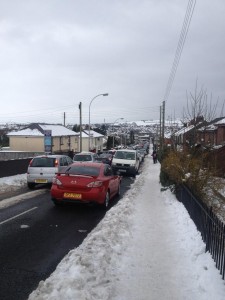 Traffic queuing on the Hightown Road in Belfast

Ms Carson said the weather conditions on Friday were “exceptional”.

“Our key focus is to restore power. We have been using a helicopter to patrol remote areas and have commissioned an additional helicopter to deliver NIE emergency crews, engineers and equipment into these areas on Monday by air.

“Our incident management centre and local incident centres in affected areas are open and will remain operational until all customers are back on supply.”

NIE said any customers still without power should contact them.

The trust apologised but said the bad weather was placing extra pressures on its hospital resources.

It said the cancelled operations would be rebooked at the earliest opportunity.