SKIPPER OF CO DOWN FISHING BOAT DUE IN COURT 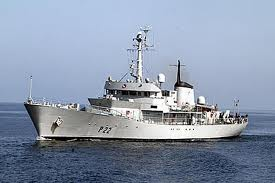 THE skipper of a County Down fishing vessel is due in court in the Republic on Wednesday on suspicion of illegal fishing.

He was detained by the Irish naval service off the County Galway coast on Tuesday for allegedly fishing illegally inside the Republic’s waters.

His Kilkeel-based vessel, the Archane, was boarded by the Irish navy about 11 nautical miles south of the Aran islands.

The Irish naval vessel, the L.E. Aoife, escorted it to shore at Rossaveal.

There were six crew on board the Archane, all from the Kilkeel area, when it was detained.

They were met at Rossaveal by Irish police and fishing officials.

In a statement, the Irish Defence Forces said: “There have been 206 vessels boarded by the naval service in 2013, six warnings were issued and this is the first vessel detained this year.”

The L.E. Aoife is one of three offshore patrol vessels operated by the Irish naval service.