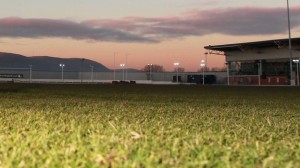 THE Danske Bank Irish Premier League game on Tuesday night between Lisburn Distillery and Portadown has been postponed yet again.

A waterlogged pitch at New Grovesnor following heavy rain mean it had to be called off despite valiant efforts of ground staff.

The match has now been called off four times.

The clubs will try again to fulfil the fixture on Wednesday night if the pitch has recovered.

The teams are due to meet at New Grovesnor on Saturday.

Lisburn Distillery are battling against relegation while Portadown retain only slim hopes of a top six spot ahead of the impending league split.

Tuesday night’s other Premiership game between Glentoran and Dungannon Swifts goes ahead as planned.